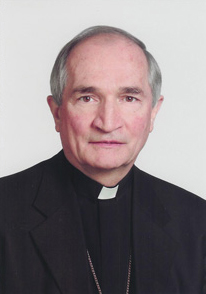 Apostolic Nuncio, Permanent Observer of the Holy See to the United Nations in Geneva.
President of the Caritas in Veritate Foundation

Archbishop Silvano M. Tomasi's formative education was both in Italy, where he was born in the Veneto region in 1940, and in New York, where he studied theology and was ordained a priest in 1965. He holds a masters' degree in social sciences and a doctorate in sociology from Fordham University in New York. He was assistant professor of sociology at the City University of New York (Richmond College, City College) and at the New School of Social Research (1970-74). He carried out pastoral work in the New York area and served as Provincial Superior of his religious Congregation, the Missionaries of St. Charles â€“ Scalabrinians. He has published books and articles related mostly to migration issues.

From 1983 to 1987 he served as first Director of the office of Pastoral Care of Migrants and Refugees (PCMR) of the United States Conference of Catholic Bishops (NCCB/USCC).

From the end of 1989 to his appointment as Archbishop and Apostolic Nuncio on June 27, 1996, he served as Secretary of the Pontifical Council for the Pastoral Care of Migrants and Itinerant People, a department in the Roman Curia.

From 1996 to 2003 Archbishop Tomasi served as Apostolic Nuncio to Ethiopia, to Eritrea and to Djibouti and as Observer to the African Union, formerly the Organization of African Unity (OAU), whose headquarters are in Addis Ababa.

In September 2003 Archbishop Tomasi began his service as Permanent Observer of the Holy See to the United Nations and Specialized Organizations in Geneva and to the World Trade Organization.